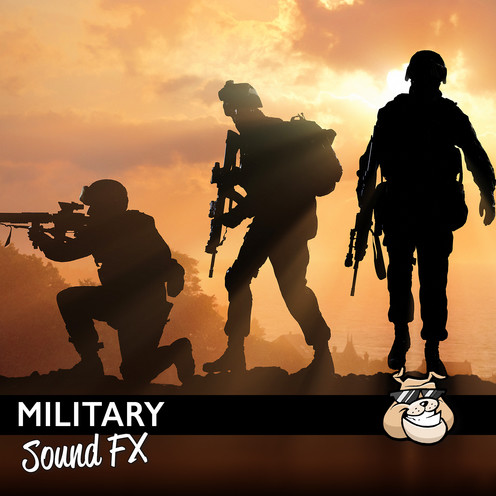 The Sounddogs Military Sounds Archive features 729 sounds and noises in the armed forces category, including fighter jets, Humvees, tanks and other armoured vehicles. The Sounddogs Military Sounds Library has a nice collection of tanks and army vehicles, including good old Hummer and historic tanks from WWII. Rob Nokes, the founder of Sounddogs, lets the tanks rattle over different surfaces at different speeds.

The Military Sounds Archive is not concerned with superior firepower but instead contains a comprehensive range of vehicle and airplane sounds.

The Sounddogs Military Noise Archive not only brings tank clatter, the roar of airplanes and helicopters, it also brings you directly to the deck of an aircraft carrier.

The Sounddogs Military Sounds Archive contains an impressive collection of fighter jets, including the classic F-14 Tomcat and the Harrier Jet. Both of these jets, however, are more likely to be bound in a scrapyard than on a runway these days. If the name doesn't immediately ring a bell, the Harrier was the plane that could take off vertically because of its rotatable jets (and, yes, it did look very weird and somehow just, er, wrong).

The good old F-14 is famous for being the jet of choice for Tom Cruise (aka Maverick) in Top Gun.

The feats of human engineering in the world of aviation continue to dazzle - particularly in relation to the sound level created by some of these fighter jets. It will probably remain a mystery forever if these engines really need to be this loud; maybe they were deliberately engineered to be this noisy in order to make sound recordists happy...or to scare off enemies...or simply to annoy the general public.

The Sounddogs Military Sounds Archive contains a wealth of recordings of tanks and armoured vehicles. Once again, Rob Nokes' recordings - although focused on a few select models - are as comprehensive as possible.

Rob Nokes and his Sounddogs team went to great lengths to document the listed tanks in detail and capture as many recordings as possible of each vehicle. Recordings include: tracks, driving at different speeds and from different perspectives, interior and exterior recordings.

The material also includes some multi-channel recordings of individual parts of the tanks, i.e. each recording comes with several audio channels. These recordings include the cockpit, the motor and the exhaust among other interesting elements.

For more information about the featured vehicles and recordings, please refer to the Avosound online track sheet.