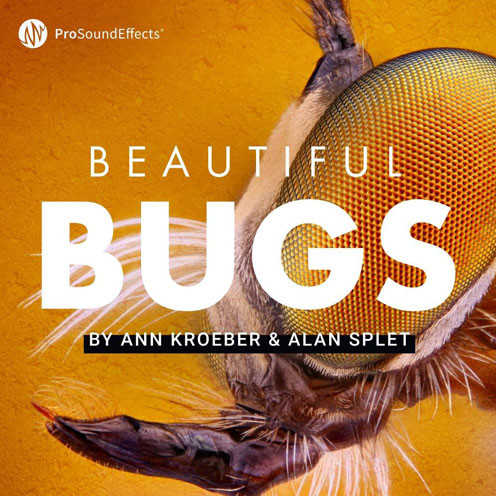 The impressive spectrum of emotion conjured by these artful insect recordings ranges from ominous, frightening, irritating, and disgusting all the way to lonely, tranquil, and soothing. Inject mystery and surrealism in your scenes or add unique character and texture to your creature design with impressionistic buzzy swarms, heavy rhythmic pulsing and chirpy choruses.

These 88 insect sound effects were recorded and designed while working on major feature films including David Lynch’s Blue Velvet and Peter Weir’s The Mosquito Coast. These masterful recordings, collected on the Beautiful Bugs sound library were captured on excursions in the jungle of Belize, the Alaskan wilderness, muggy summertime North Carolina, and an insect lab in Berkeley, California.

Martin Stig Andersen - Game Sound Designer & Composer
"For me, it's not about recreating reality. It's about what else the sound can convey. That's a quality I like about Ann's sounds - you get a feeling that each sound is about much more than what it actually represents."
Gary Rydstrom (Winner of 7 Academy Awards in sound)
"Ann Kroeber has a unique ability to provide one-of-a-kind sound effects. Both as a recordist, and as the knowledgeable gatekeeper of a vast, renowned library, Ann has given me great sounds that lead to great ideas."